How does the earthworm dig its burrow? 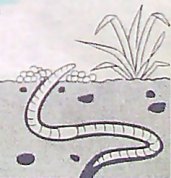 As we can guess from its name, the earthworm lives in the ground.  It digsits burrow by pushing its way through the soil.

To more forward, it grips the dirt with tiny stiff bristles on the tail end of its body.  Then it stretches its body forward.  This action pushes the need through the dirt.

Then the earthworm grips the dirt under its head and pulls up the tail end of its body.

As the worm tunnels, it eats its way through the layers of earth which it cannot push through easily and digests the dead plant material in the soil.

The soil passes through the earthworm’s long body and is usually deposited above ground in littleheaps of dirt balls, called castings.

The earthworm usually stays underground by day.  at night it may put its head out of its burrow to find bits of leaves and grass to eat.  Earthworms are helpful to farmers and gardeners.  By digging burrows, they help enrich the soil. – Dick Rogers